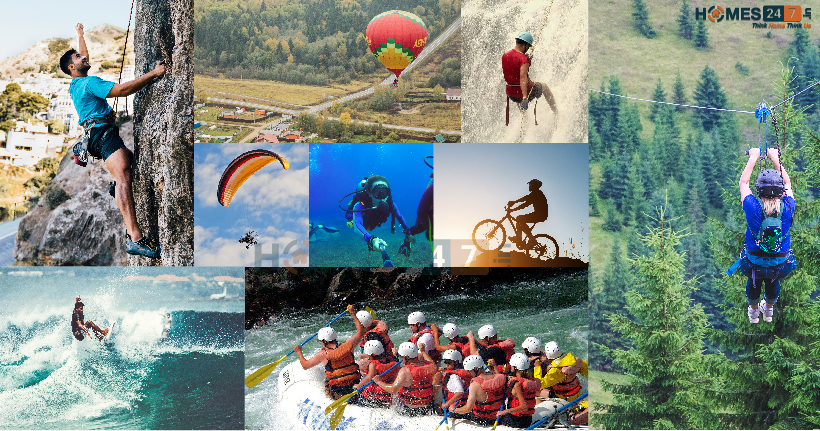 Adventure sports seems to be the new hip thing in today’s times. Everyone wants to or has tried their hand in some outdoor activity. Be it trekking, rock climbing, kayaking, paragliding, and so many others.

Yash Choudhari, a professional rock climber and the co-founder of Beyond the Wall, says, “We need that feeling of an adrenaline rush, that feeling of doing something challenging.” The Adventure tourism industry is blooming much more than ever. All these things have gained momentum only in recent years.

Even though there are risks, but we are here to tell you otherwise. Youngsters should get into adventure sports. And here is why –

It keeps you fit –

One of the obvious benefits of adventure sports for youth is fitness. Adventure sports are not monotonous like your everyday workout. Moreover, they are enjoyable and do more in burning your calories. An hour of river rafting can burn 900 calories, apparently. While riding a skateboard for an hour can help you burn 500 calories.

According to Coast Water Sports, “with extreme sports, you tend to use your muscle in the most unusual way and work your muscle differently than you would daily, or in any light exercises”.

It is a form of self-expression –

Adventure sports for youth give you the much-needed thrill and energy you might be seeking in life. “When I started rock climbing, I felt as if I was alive again,” says Yash.

“In cities, you have crosswalks, sidewalks, elevators—you’re told exactly where to go at all times. And you don’t even interact with the environment. Whereas when you get to the bottom of a mountain, you think, I can go up anyway I want, and it’s up to you and your own imagination on how to get down,” says Cody Townsend, the celebrated professional Skier.

It is much more than fitness –

Yash Choudhari comments, “Fitness is obviously a by-product of adventure sports. But do not get into it just for the sake of that. Adventure sports is therapeutic.” Almost every adventure sport for youth challenges them not only physically but also mentally. An Australian study by Brymer and Schweitzer in 2012 confirmed that extreme sports could be good for the health, reducing anxiety and overcoming fear.

The sense of excitement and the serotonin boost from these sports help you relieve stress. Thus, it contributes directly towards improving your mental health. It tests you to stay calm and be clear and stable under high-risk situations.

An interview by Huffington Post with a Seattle-based environmental psychologist states, ‘In addition to helping decrease stress levels, spending more time with nature shows a shift toward more positive moods… the theory is that we respond positively to things that are good for us. Trees offer shade, protection and often have fruits and nuts, so they are a source of food as well as protection and comfort.’

It helps you gain a sense of humility –

Hanging by a rope or climbing rocks that might fall can make you realize that you are a mere immortal. It might sound ruthless, but humility is an important life lesson. We often forget it amidst our entitlements. You cannot climb a mountain or jump off a cliff without listening to your instructor’s instructions because it is a matter of life or death. You need their instructions to survive the experience.

A study conducted in 2007 was titled “Extreme Sports: A Positive Transformation in Courage and Humility.” It revealed, “Humility and courage can be deliberately sought out by participating in activities that involve a real chance of death, fear, and the realization that nature in its extreme is far greater and more powerful than humanity”.

It boosts your confidence –

Adventure sports for youth challenge their physical strength like no other can. Obviously, it is not so easy to climb a mountain. It is a human tendency that we feel confident after accomplishing a physically challenging task.

“Adventure sport, in itself, is a way of empowering people, and when we planned on initiating a community project, we decided to reach out to people who feel most disempowered either because they feel they have limitations or because society imposes restrictions on them. We felt this could be a way to help them overcome their fear and boost their self-esteem,” shares Mahalakshmi, a participant of Landmark Education’s Self Expression and Leadership programme.

This boost of self-confidence can have a great impact on many aspects of your life. A study conducted at the Queensland University of Technology, Australia, found a link between extreme sports and self-confidence. It revealed, “Participants’ experience of extreme sports was revealed in terms of intense fear, but this fear was integrated and experienced as a potentially meaningful and constructive event in their lives.”

It keeps your phobias in check –

We often fear a lot of things. We fear the known, sometimes the unknown. And, without realizing these fears consume our minds and impair our confidence. Adventure sports for youth keeps them at that edge and also keeps their fears in check.

Cody Townsend commented, “I think you’re always scared. You don’t lack fear—you have to have fear out there. That’s what keeps us safe and helps us make the correct decisions. For most people, it’s going into a bad neighbourhood at a certain time of night that may be scary,” Townsend adds. “I just think we play on a different scale.”

It draws you closer to nature –

“Adventure sports makes a person more sensitive and caring towards nature”, believes Yash. Yash co-founded Beyond the Wall, which is an adventure travel company. “We started Beyond the Wall to make outdoors accessible to everyone in an environmentally sustainable manner. Mother earth is for everyone,” he added.

Richard Louv, journalist and author of Vitamin N, The Essential Guide to a Nature-Rich Life, coined the term “nature-deficit disorder.” He believes that human beings, especially children, are spending less time outdoors, which can cause a lot of behavioural changes

He said, “Young people are more likely to be attracted to riskier outdoor adventures. They can still commune with nature, even if they’re going fast and are wearing body armour. In fact, the risk inherent in extreme sports might make some kids “more aware of their surroundings.”

It teaches you when to take a risk –

There is no denying that adventure sports, for youth, has a lot of risks. People engaging in these have to put their life at risk at most times. But is there really anything that is completely risk-free?

Youngsters often lose interest in things they don’t find challenging. Thus, they tend to rush after difficult things. But it is imperative to know when to take a risk. Risks must be calculated. One should always weigh the pros and cons.

James Burr, a professor at the University of Guelph, Canada, says, “Teens may lack the ability to judge risks and the consequences of failure. That’s why it’s important for them to have guidance from a coach or parent. Nevertheless, extreme sports can still be part of a healthy, balanced life. Participating in extreme sports keeps teens active and helps them learn to take age-appropriate risks.”

It gives a sense of freedom –

Obviously, there would be those who would recommend other physical sports instead of adventure sports. It no denies that sports like basketball or soccer are physically challenging as well. But these kinds of sports are part of the mainstream now.

The result is that they have become heavily regulated. These sports are even part of the academic curriculum these days. Therefore, some are forced into taking part. But the case of adventure sports for youth is very different.

Adventure sports for youth is a medium of liberation. It gives you the freedom to choose, make your own decision. In the 1990s, Norwegian Psychologists encouraged youngsters addicted to drugs to take up adventure sports as a part of the research. After a few months, it was observed that the subjects had fewer drug problems and even performed well academically. They even showed fewer signs of being anti-social.

It feels great to be in control of a risky situation –

If the feeling of freedom is liberating, then the feeling of being in control of a life-threatening situation is another thrill. You have the equipment, the people, the instructions, everything in your control.

“Risk is everywhere, and for many, it is more risky driving on the roads where you have no idea what other drivers are doing,” Eric Brymer, one of the authors of the study, ‘Evoking the Ineffable: The Phenomenology of Extreme Sports’, explained in an email. “In their chosen sport, they have an excellent understanding of the activity, themselves and the environment. So [there is] danger in the sense that if it goes wrong, death is likely, but that is photoshop cs6 serial no not the same as risk. Risk is about likelihood and consequence. The consequence might be serious, but as they have such great knowledge, the likelihood is low.”

He further added, “[We should] move away from the notion that extreme sports are about risk and risk-taking and therefore only open for microsoft office torent a few people who have the required personality structure, to a more inclusive perspective that means everyone can get involved. In the end, not everyone will want to be an extreme sports participant, but adventure sports for youth is potent and beneficial.”

FROM RAGS TO RICHES, THE IRISH PRODIGY, CONOR MCGREGOR HAS TRANSFORMED THE UFC. Click here to read the full article.

10 SCIENTIFICALLY-PROVEN BENEFITS OF TRAVELLING – WHAT TRAVELLING DOES FOR YOU? Click here to read the full article.